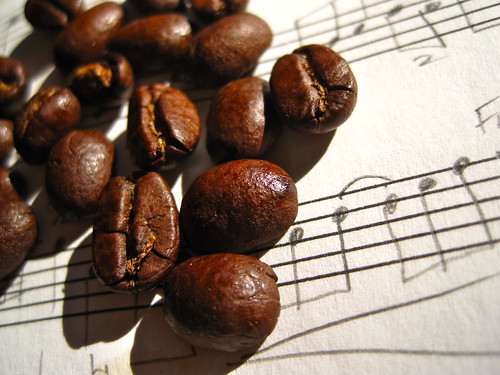 Johann Sebastian Bach (1685-1750) was known to burn the midnight oil, feverishly scribbling out brilliance by candlelight. Responsible for creating reams of new, original music for very prominent performances for myriad occasions throughout the year, he may have felt his life was a long series of encroaching deadlines. Fortunately, J.S. Bach was a tireless workaholic who probably enjoyed his vocation with a zest and verve many of us could never hope to claim.

Still, no matter how much you enjoy your work, a deadline is a deadline and sometimes even the best composer needs a little boost. Fortunately for Bach, there was an exotic, miraculous new thing popping up in eateries all across Europe: coffee!

While we’re not at all certain how many cups a day Bach swilled down while scribbling away, we do know the beverage played a significant role in his life — so significant that he wrote an entire cantata about it: Schweight stille, 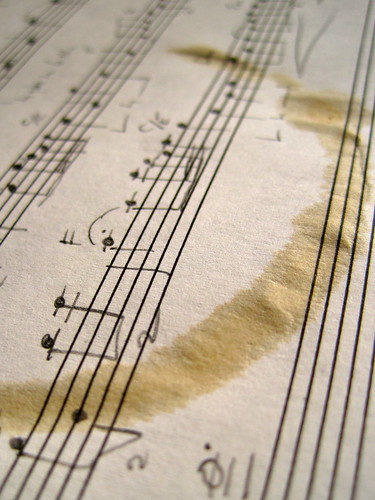 plaudert nicht, BWV 211 (“Be Still, stop chattering”). The plot centers around its heroine, Lieschen, whose only goal in life is seeking out her next caffeine fix much to the chagrin of her father who wants to unload his jittery daughter on a suitor asap. To please her father, Lieschen concedes that she might give up coffee if it meant finding a lover, but we soon find out she intends to have both!

Lieschen proclaims in her aria (floridly accompanied by the flute): “Coffee — I have to have coffee!…if someone wants to pamper me, then bring me coffee as a gift!” Since Bach rarely wrote secular music, we can assume his inspiration must have been deeply felt enough to thumb his nose at the anti-java crowd who apparently existed even in his day. After all, the moral of the cantata stated clearly in the final movement is “drinking coffee is natural.”

To highlight the often intimate connection between composers and coffee, I’ve put together a small series of recipes to feature coffee in ways that go beyond that regular morning cup to get your juices flowing. Today’s recipe makes coffee a prominent part of a delectable dinner entrée.

Heat the oil and butter in a large non-stick skillet over medium-high heat until butter just begins to brown. Add chicken pieces, reserving any remaining seasoned flour; cook 3 minutes per side or until just golden. Remove chicken to a plate tented with foil; keep warm.

For the red-eye gravy: add the minced onion, mushrooms, and 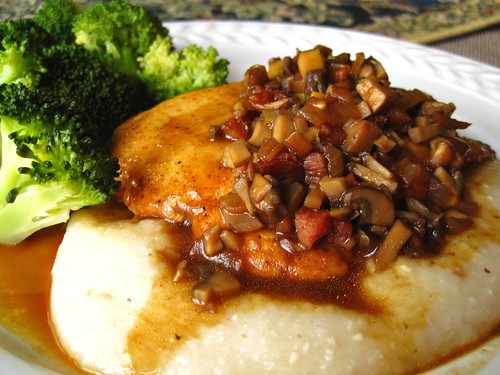 salt to the oil remaining in the skillet. Saute until mushrooms release their juices and liquid almost completely evaporates (about 5 minutes). Meanwhile, in a 2-cup measuring cup or large bowl, combine the coffee, ham, brown sugar, 2 tablespoons water, all-purpose flour, and any reserved seasoned flour. Add the coffee mixture to the mushroom mixture; bring to a boil and stir until thickened slightly. Lower heat to a bare simmer; return chicken pieces and any accumulated juices to the skillet; cover and allow to simmer an additional five minutes or until chicken is cooked through.

Serve chicken atop parmasean cheese grits or mashed potatoes topped with a generous portion of the red-eye gravy. Any leftover gravy is excellent served with brunch over eggs or omelets.