The table is set, the buffet dishes are in place, the napkins are neatly folded, the kitties are on their best behavior. It’s time for the Manitou Winds Virtual Potluck!

You can put your coat over there and head over to warm yourself by the fire. I think I hear our next guest arriving… 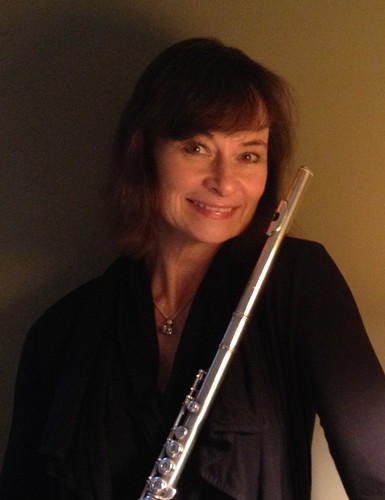 Yes! It’s cold outside! Born and raised in Michigan, Sam has lived in Northern Michigan for 35 years and counting. “I don’t mind the snow at all — love it. But, the constant cloudiness is a drag,” she says. The clouds don’t stop Sam, though. She’s likely to be out cross-country skiing, hiking, or camping with long-time partner, Bill, whether there’s sun or not!

“While through-hiking Zion National Park (over 70 miles) once, we went through the gamut of weather conditions and saw some amazing, strange scenery. The desert environment is very different — surreal to this Michigan girl, but I absolutely loved it,” she says.

Like most zephyrous flute players, Sam is adventuresome. Although, Sam says she doesn’t really agree with most of those 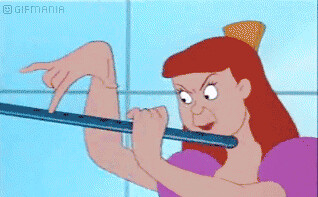 “musical stereotypes” that are the stuff of legend in practice rooms and green rooms.

“There are usually reasons for stereotypes in general,” she says, “but I’ve conducted and performed with musicians of many facets and can’t say I’ve been able to categorize any of their personalities based on their instruments. For instance, flutists are generally construed to be girly-girls… which I’m definitely not!”

From stereotypes to superstitions… Sam has something of a lucky charm in her flute case. “Well, it’s not really a superstition, just a comfort,” she explains, “My swab handkerchief was worn onstage by a dear departed friend at the Old Town Playhouse in 1985. I smile 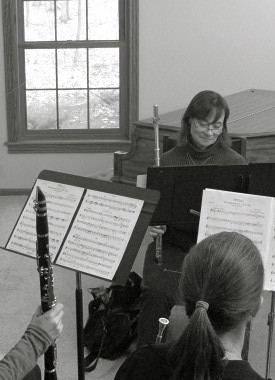 at the thought that he’d appreciate me swabbing my spit with his costume!”

Active in the outdoors and on the music scene, Sam has a long history with Traverse City’s Old Town Playhouse wearing many hats — from the stage to the orchestra pit to the boardroom. In 2015, she conducted her 16th musical production with the theater in a highly successful run of Shrek: The Musical.

Why would she join a chamber group on top of everything else she’s built into her busy schedule? “I like the intimacy of the communication and connection of the personalities and musical characteristics of Manitou Winds,” she explains. “I love trying out new pieces — particularly those that Jason finds, arranges, or composes for us.”

Whether you’re a talker or a listener, a leader or a follower — it all comes out in rehearsal! In Manitou Winds, five personalities as unique as our five different instruments have to make a concerted (ahem) effort to collaborate in order to be successful. For chamber music, this is often a matter of verbal and musical communication with lots of non verbal cues thrown into the mix as well. Something truly musical happens when those independent elements come together to create a unified sound.

If afforded an ounce of spare time, other than doing more music and outdoor recreation, Sam says she’d probably do more reading. “I’d also like to get more involved learning about animals and working with rescue and veterinarian organizations,” she says, “and maybe learn how to cook!” 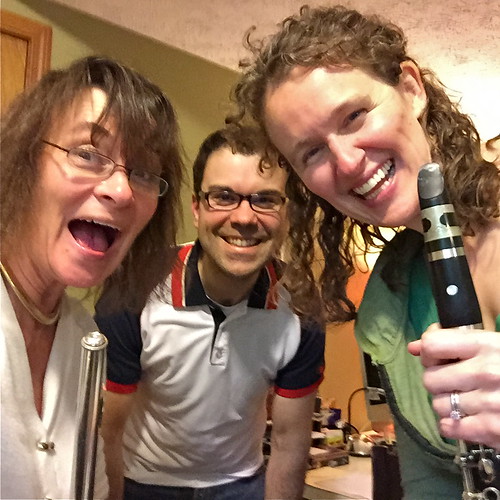 Actually, Sam can cook, she simply doesn’t have time very often. She’s much more likely to cook while sharing the kitchen with Bill. For today’s potluck, she’s brought a tasty lasagna to share. As semi-vegetarians, she and Bill consider this lasagna a special treat for those occasions when they have a carnivorous craving…

Spinach & Turkey Lasagna
Serves 8
Sam says, “My trumpet-playing boyfriend improvises (yes, he’s primarily a jazz musician) while cooking, and is very good at it. This is one of my favorite meals for the two of us to snuggle up to in winter.” Using whole wheat lasagna, lower fat cheeses, and lean ground turkey, it’s a tasty, lighter version of a comfort food classic. 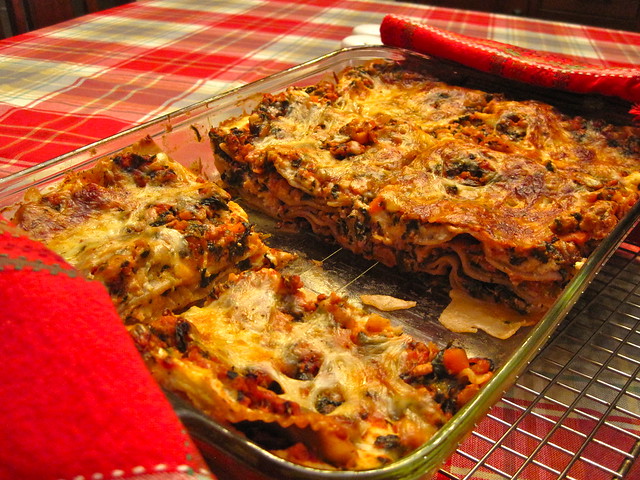 Preheat oven to 375-degrees. Bring a large pot of salted water to a boil.

Make the meat sauce: Meanwhile, in a large sauté pan or a 3-quart heavy-bottomed saucepan, heat the oil over medium-high heat. Add the crushed garlic; cook, stirring constantly, for 30-seconds or until very fragrant. Stir in the onion, carrot, celery, bay leaf, and a small pinch of sea salt; cook, stirring occasionally, until vegetables have softened and are just beginning to brown (app. 5-8 minutes). Add ground turkey and herbs, season lightly with salt and pepper; cook 5-7 minutes more, stirring to break up any large chunks. Stir in tomato sauce, spinach, and pepper flakes 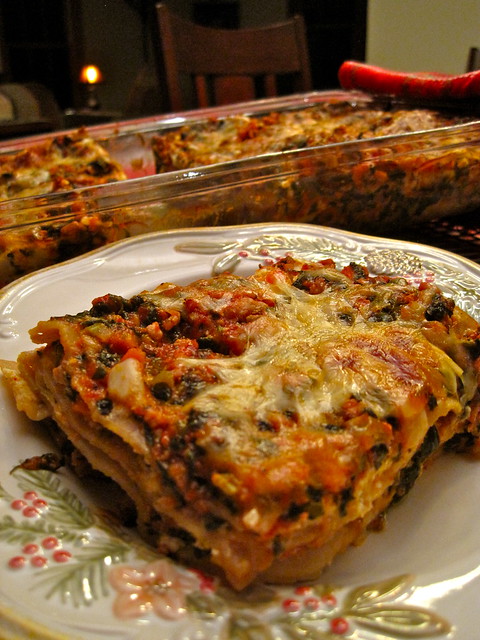 Make the cheese filling: In a medium bowl, combine the ricotta cheese, half of the shredded mozzarella, and the egg white or egg substitute; season lightly with salt and pepper.

To assemble: In a 13×9-inch pan, spread approximately 1/4 cup of the meat sauce (be sure to remove the bay leaf). Cook the lasagna noodles (3-4 at a time) in the boiling salted water for 4 minutes, stirring occasionally. Remove noodles with tongs or a slotted spoon and layer atop the thin layer of sauce. Spread 1/3 of the cheese filling atop the noodles. Top with 1/3 of the meat sauce. Repeat to form three layers. Top with the reserved shredded mozzarella.

Bake at 375-degrees 25-30 minutes or until bubbly and cheese is lightly browned. Allow to cool 10 minutes before slicing and serving.