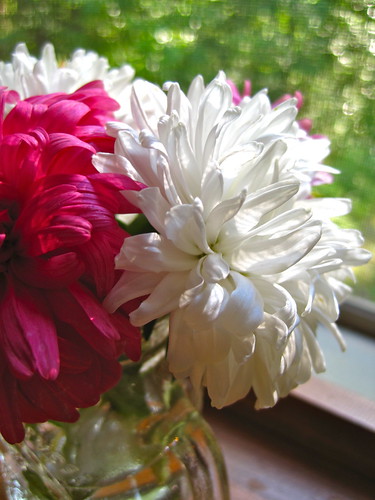 My fascination with composers’ eating habits began innocently enough in my undergraduate years… now that I’m no longer a student and can study anything I choose, I’ve decided to dust off that quest and go off in search of my favorite composers’ favorite breakfasts!

When we think of the lives of Classical music’s most storied composers, what likely comes to our minds is either stuffy, powdered wig scenery (fancy galas with wealthy people dressed in their finery) or we think of the tortured, starving artist scribbling onto scraps of manuscript paper. While both images are in some cases true, each composer’s story is unique in its own way — even when compared to composers of the same time period.

Joseph Haydn (1732-1809) is one of my favorite composers — and not just because of his music. Haydn’s story is one of those classic, rags-to-riches narratives with a happy ending. Born in a small town to parents who could neither read music nor provide him with any advanced training, Haydn slowly and patiently worked his way 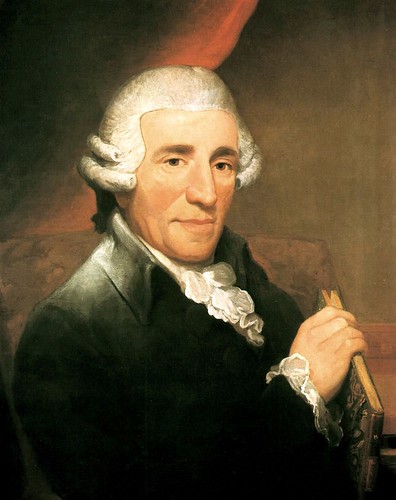 through the often complicated layers of 18th century society to become one of the greatest and most prolific composers in history.

Haydn went from a nearly-starved schoolboy to a wealthy and well-connected composer who enjoyed celebrity status in his later years. While he’s regarded as the “father” of both the symphony and the string quartet, it’s amazing to realize he was neither a child prodigy nor privileged enough to receive formal instruction in composition. Thus, he was largely self-taught — privately working his way through textbooks and scores while working odd jobs as a young man.

Because of his skills as a violinist, he gradually gained the favor of aristocratic patronage. When he eventually came to be an official staff member of Hungarian nobility, he was finally in a position that would provide him with all the resources needed to hone his compositional skills. In fact, his success in composition became a vital part of staying alive!

Like any other member of staff, he wore a uniform and lived in servants’ quarters. Rather than scrubbing chamber pots and clearing out horse stables, however, he was required to write, rehearse, and conduct all of the music for the noble family and their many guests. During his time with the Esterházy family (1761-1790), he faced a mountainous workload and ever-shifting musical and non-musical demands. Thankfully, he also had daily access to his own very talented orchestra and the finest singers. This proved to be most advantageous for his artistic growth, allowing him to experiment at 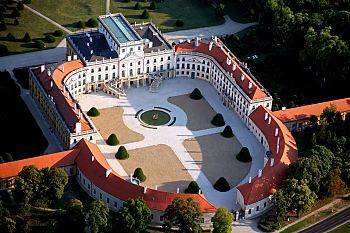 will. Within the staggering musical output he created while serving the Esterházy family, one can trace the evolution of style and technique that eventually shaped all of Classical music — and he was self-taught!

The immense wealth of the Esterházy family eventually led them to construct a new palace (mainly as a summer residence) in Esterháza. It was an immense palace not only boasting 126 rooms but also containing its own church, opera house, and marionette theater. Haydn’s residence was moved each year from Eisenstadt to the Esterháza estate each time the family relocated. Though trapped in the middle of nowhere — isolated from civilization and in the middle of what was then swampland — work never slowed for Haydn.

On one occasion, after having returned once again to Esterháza, Haydn wrote in a letter to his friend Marianne von Genzinger:

Well, here I sit in my wilderness; forsaken, like some poor orphan, almost without human society, melancholy and dwelling on the memory of past glorious days… I lost twenty pounds in weight in three days, for the effects of the good fare at Vienna has disappeared on the journey back. Alas! alas! thought I to myself, when forced to eat…a tough grill instead of a Bohemian pheasant, Hungarian salad instead of good juicy oranges, and dry apple fritters instead of pastry. Here in Esterháza no one asks me, “Would you like chocolate with or without milk? Will you take coffee with or without cream? What can I offer you, my good Haydn? Will you have vanilla ice or strawberry?”

Being a man who obviously appreciated good food, Haydn would have loved today’s recipe — a slice of this Viennese-style Cherry-Almond Tart served alongside his morning coffee (with or without cream, whichever he wished). 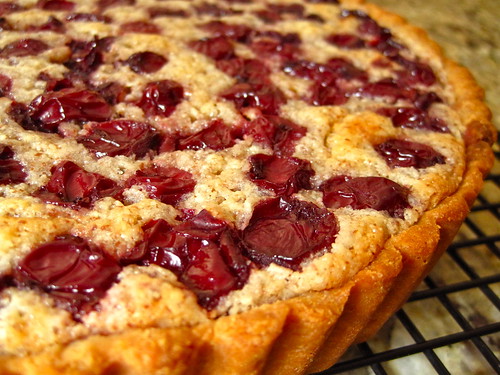 For the shell: Whisk together the egg, egg yolks, sugar, and salt in a large bowl; whisk until mixture turns a light yellow. Continuing to whisk, add softened butter one tablespoon at a time, whisking until combined. With a wooden spoon, gradually work in both flours until a smooth dough forms.

Place a large sheet of plastic wrap on work surface. Empty dough onto the plastic wrap; knead gently to incorporate any loose dry ingredients. Form dough into a disk and cover with plastic wrap; chill for at least 2 hours and up to 24 hours.

For the filling: Add almonds and flour to the bowl of a food processor; pulse until larger pieces are more manageable and then finely grind. Add the sugar; pulse briefly. Next, add softened butter and extract; blend until smooth. Mix in egg and egg white. Transfer filling to medium bowl; cover and chill until needed.

To assemble and bake: Remove tart dough disk from refrigerator and allow to stand at room temperature for about 5-10 minutes to soften slightly. Place the dough in a removable-bottom tart pan (you may use a 9-, 10-, or 11-inch tart pan); pressing the dough, work it with your fingertips to cover the bottom and sides of the pan. Using a fork, prick the bottom of the shell in several places. Place unbaked shell in freezer to chill for 20 minutes. Meanwhile, preheat oven to 400-degrees. Place rack in center of oven.

Remove shell from the freezer; cover with two overlapping sheets of aluminum foil. Fill tart pan with pie weights making sure the weights are to the top of the pan and evenly distributed over the entire surface. Bake the shell for 20 to 25 minutes or until it is 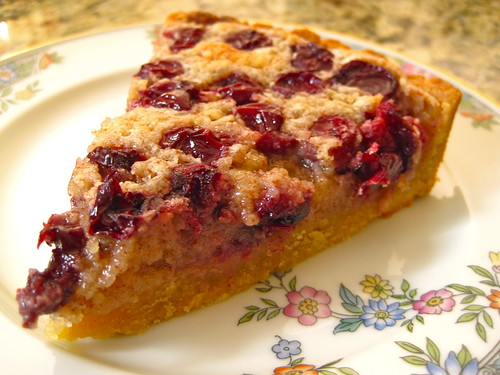 Reduce oven temperature to 350 degrees F. Once shell has cooled, spread the chilled filling evenly into the bottom. Place cherries atop filling and bake for 40-50 minutes or until filling has puffed and browned slightly. Allow to cool completely before serving.

Want an ideal Haydn-esque soundtrack to enjoy your coffee and tart? Haydn’s Symphony No. 45 in F-sharp Minor (The “Farewell” Symphony) is entirely appropriate. The final movement was Haydn’s nudge to Prince Esterházy that it was time to pick things up, leave the swamp, and head back to Eisenstadt. During the adagio in the fourth movement, each musician stops playing, snuffs out the candle on his music stand, and leaves in turn, so that by the end, there are just two muted violins left on stage!