This post was written in preparation for our December 2015 Winter Songs & Carols program.

Winter Songs & Carols will be Manitou Winds’ first-ever concert — one they hope to make an annual tradition in Northern Michigan. It’s a concert in exploration of the many facets of winter — from the holidays we look forward to each year to the more mundane aspects of a season that tends to get a lot of bad press. Each year, Manitou Winds plans to 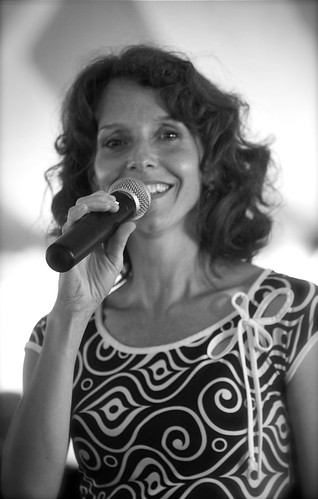 gather music — new and old — to celebrate winter in new and exciting ways.

For this year’s event, Manitou Winds is tremendously honored to be working with the glittering talent of none other than Susan Hatt Johnson of Frankfort, MI!

If you’re a lover of music and the arts in Northern Michigan, it’s likely you have already experienced Susan’s dynamic stage presence and powerful performances. In addition to singing and dancing with the sensational SwingShift (a local swing band) in various hot spots around Northern Michigan, she has made recent guest performances in Traverse City with both The Dance Center, Inc. and Encore Winds, belting out demanding diva ballads such as My Heart Will Go On and Where Are You Christmas.

Susan has also graced the stage in two recent productions with Traverse City’s stellar Old Town Playhouse. In 2013, she starred as Fantine in OTP’s production of Les Miserables.

Then, in spring 2015, she starred as Gingy/Sugarplum Fairy in the OTP production of Shrek: The Musical where she was joined onstage by her husband, Brian Johnson, who starred as Lord Farquaad:

Manitou Winds is delighted to partner with Susan for Winter Songs & Carols. For this performance, Jason has arranged four unique songs to highlight Susan’s remarkable versatility, pairing her with the members of the ensemble in imaginative ways.

“These four songs are likely going to be a surprise for our audience,” he says, “Most people would expect purely Christmas music, but we’re taking this in a different direction.” Jason won’t disclose what four songs Susan will be singing, but he did mention Sarah McLachlan, Tori Amos, and Loreena McKennitt.

Manitou Winds’ Woodwind Gourmet had an opportunity to chat a bit with Susan after her recent rehearsal.

WWG: Did you always know you wanted to be a singer/actress? Did you have training as a vocalist?

Susan: I have been singing for as long as I can remember — even as a young child. My parents bought me an old upright piano when I was eight years old. I started acting in junior high. Then, in high school, I started writing my own music. I always knew I would do something with music, though I made a pact with myself (right around the time I started private lessons at age 15) that I would not major in music/theater, so I’d have some other career skill to fall back on. But, while at MSU, I did continue training in opera and musical theater.

WWG: You were originally from Muskegon. You went to MSU. You and your family now live in Frankfort. Obviously you’re a Michigander through and through! What’s your favorite part about living in Northern Michigan?

Susan: Of course I’d have to say it’s the people of Northern Michigan. But, definitely also the arts, here. And you can’t forget Lake Michigan.

And, as you’d expect, he didn’t let her get away before asking what Susan’s favorite wintertime dinner is… 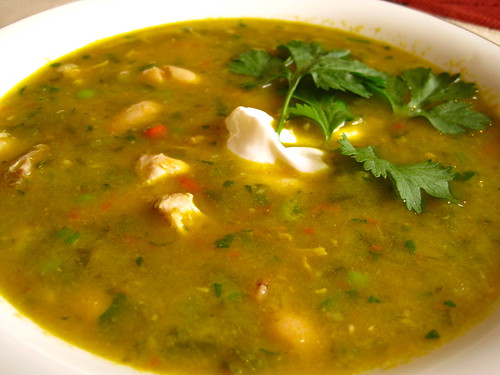 Season chicken thighs with salt and pepper. Heat oil in Dutch oven over medium-high heat. Working in batches, brown the chicken thighs (about 4 minutes per side) then transfer to a plate; remove and discard skin.

Meanwhile, remove and discard ribs and seeds from 2 hot chili peppers; mince and set aside. (Note: you can leave all the seeds and ribs in if you prefer your chili spicy!)

After removing the browned chicken, pour off all but 1 tablespoon fat from the Dutch oven (add additional oil if necessary), and reduce heat to medium. Add minced chili peppers, chopped poblanos, onions, garlic, cumin, coriander, and 1/4 teaspoon salt. Cover and cook, stirring occasionally, until vegetables have softened (about 10 minutes).

Transfer 1 cup cooked vegetable mixture to a food processor or blender. Add 1 cup beans and 1 cup broth; process until smooth. Return this mixture to the Dutch 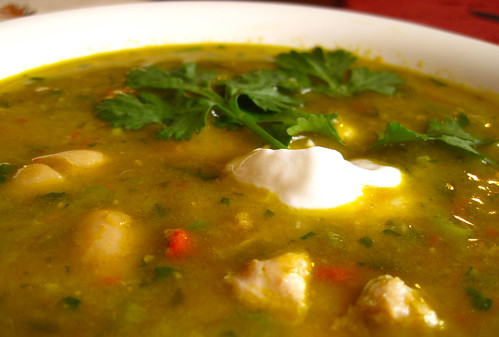 oven along with the remaining 2 cups broth and the browned chicken thighs. Cover and simmer, stirring occasionally, for 25 minutes or until chicken registers 165-degrees.

Transfer chicken to a large plate. Stir in remaining beans and continue to simmer, covered. When cool enough to handle, shred chicken into bite-sized pieces; discard bones. Stir the shredded chicken, lime juice, cilantro, and scallions into chili and return to simmer. Allow flavors to mingle for another 10 minutes or so. Season with additional salt and pepper to taste. Serve with a dallop of sour cream and a side of corn muffins or crusty bread.