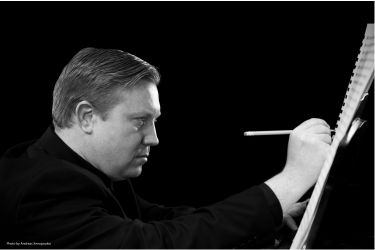 As creative director of Manitou Winds, I sometimes find it difficult to select pieces to add to our repertoire. Admittedly, this is worsened by the sheer abundance of chamber music in the universe (more is being created every day) and the realization that I’ve never heard most of it! 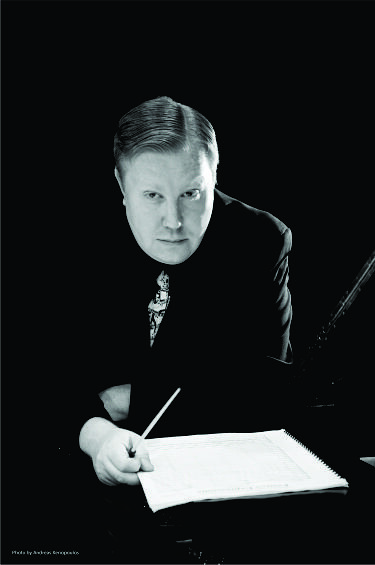 When searching for new music by new composers, the process is perhaps a little more daunting and can often be hit or miss! So, it’s gratifying when I stumble across a great composer completely by accident.

I discovered the music of Daniel Baldwin (b. 1978) while exploring the chamber music listings at Imagine Music. I was intrigued by the uncommon combinations of instruments he seemed to compose for, but I was even more impressed by his unique composer’s voice — long, dramatic phrases with lush harmonies and vivid textures.

Originally from Blackwell, Oklahoma, Daniel holds the degrees of Bachelor of Music Education from Northwestern Oklahoma State University, Master of Music Composition from Kansas State University, and a DMA in Music Composition from the University of Nebraska. Though still early in his career, he’s already an award-winning composer who has been commissioned by top orchestras including the New York Philharmonic, the Chicago Symphony, and the National Symphony Orchestra. His music has been presented on National Public Radio, Carnegie Hall, and on hundreds of university stages around the world including the MENC National Convention.

Chatting with Daniel, recently, I asked who he considers to be his biggest musical influences. “I am, of course, influenced by my teachers,” he said. Daniel studied with Eric Richards, Craig Weston, and Eric Ewazen. He 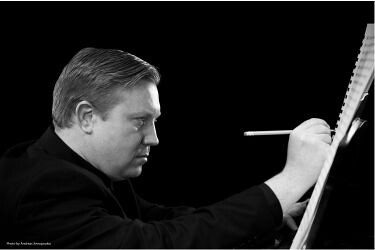 confesses, “You can hear all of their influence in my music at times.” But, he also cherishes the music of Ralph Vaughan Williams and Aaron Copland — two composers whose masterful use of folk melodies can also be heard in Daniel’s music.

A large swath of his completed works are chamber pieces, however he also enjoys writing for orchestra, wind ensemble, and recently completed his first film score (a medium he hopes to find more work in). When asked if he has any current projects in the works that he’s particularly excited about, Daniel can list an astonishing number (more than two dozen!) which are in process. After reading his list, the one I’ve got my eye on is a double concerto for oboe, alto saxophone and wind ensemble!

I have to admit I came across Landscapes purely by chance while randomly searching through titles at Imagine Music. Completely judging the book by its cover, it was the title and cover artwork that immediately drew me in. By the time I heard the final minutes of the live demo, I’d already purchased the piece — it was almost as though he’d written it for Manitou Winds! In Landscapes, Daniel employs the uncommon 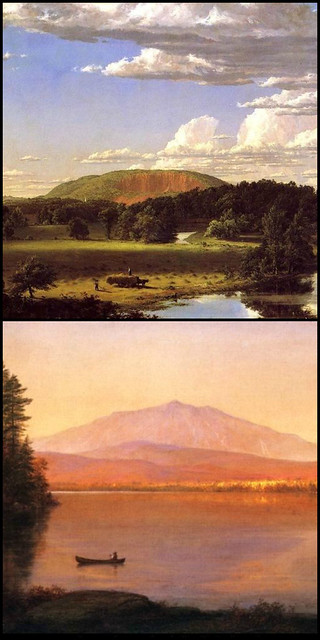 The music — more than a tone poem depicting the scenery within the paintings themselves — delves into the life story of the artist, evoking the symbolism of the imagery while translating it into the unique timbres of the quartet. The work is an epic saga exploring the early, middle, and then late career of Church. For our program, we’ll be performing movements one and three but will definitely perform the work in its entirety on a future program.

Movement one (Of Tomorrow’s Promise) is a musical depiction of “West Rock, New Haven” (1849), but is also a commentary on Church’s early professional life. In turn, the music has a “new frontier” feel to it. From the wind-swept motion of the piano score to the brave, heroic lines of the horn, you can feel the limitlessness and timelessness of the New England wilderness stretching out before you while also envisioning a young artist getting his first glimpses of fame and recognition.

Movement three (Of Quiet Reflection) depicts “Mount Katahdin from Millinocket Camp” (1895) as Church was nearing the end of his life, standing on the summit of his accomplishments while reflecting on a life that was full of both triumph and tragedy. The music, here, is at once warm and bittersweet, each member of the quartet shining through in turn.

Each member of the quartet faces beautiful but undeniably challenging music from the score. Christina’s bassoon reaches rare, breathless heights in the long, flowing phrases. Laura’s horn takes flight in the first movement and rarely touches ground — soaring higher and broader with each heroic phrase. Anne’s clarinet both soars and plumbs the depths — shifting rapidly between melody and counter-melody. Meanwhile, I’m navigating the piano score which sometimes takes on the role of “canvas” allowing the other members of the quartet to shine, but also has its own shining, shimmering moments.

Manitou Winds is excited to present this lush and evocative work by Daniel Baldwin for our New Voices concert. We certainly look forward to exploring other works by Daniel in our future programs and hope you’ll join us for this one-of-a-kind, musical journey.